8/10 Friday Round Up: May the Space Force be with you

Awesome events: It’s time to let out your cotton-candy-lovin’ inner-kid out at the Montgomery County Agricultural Fair!; Black Card Declined combines stand-up comedy and game show feels about Black culture for a night to get learnt and LOL; Lose your sanity on Friday and Saturday – and regain it on Sunday with EastSide Yoga at REI; The Pentatonix are at Jiffy Lube Sunday so get your pentaTICKETS before they’re gone; Dance like no one’s watching at Torpedo Factory’s ‘The Late Shift’ Saturday night; The Rorschach Theater is popping up a one-night-only pop-up bar inside Union Drinkery; 3 Stars Brewing celebrates their 6 year anniversary on Sunday! That’s double the stars!

Have you guys listened to the Everything Is Alive podcast? It makes me LOL. They’re interviews with inanimate objects. 12/10 would recommend – lmk what you think; Publix is 90 minutes away and WORTH every penny you spend on gas to get there (h/t Lauren Selsky); Hey Capitol Hill and those thinking-of-working-on-Capitol-Hill: There’s a book coming out that you should read; Better luck next week, Redskinz; Everyone is freaking out over this fake outlet at the airport and we’re just upset we didn’t think of it; Twitter weighed in on the Space Force logo that’s going to be outta this world; I just discovered the Comments by Celebs Instagram and I’m kind of ashamed by how into it I am.

What came first: the chicken or Don Ripper’s mustache? The Del Ray artist paints us a picture of what he thinks about art in DC 🎨

What came first: the art or the mustache? Del Ray Artist Don Ripper paints us through the creative process and what he thinks about art in DC 🎨

“You’d be amazed what you can learn and what doors can open when you venture outside of your comfort zone and experience something new.” | We present: The Dos and Don’ts of networking during August recess 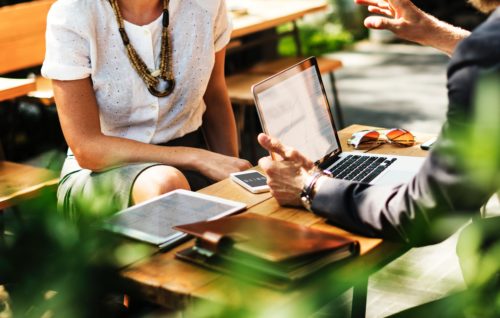 Need an Uber driver? Lauren Zelt has a guy; Aly Jacobs is an artist; Molly Edgington has some serious blender-life-hacks; If Caitlin Carroll is into Busy Philipps than we’re into Busy Philipps; Hi Kaya Singleton; Katie Harbath and Don Seymour moved to DC the same week (!!) 15 years ago; Would Corey Fritz rather drink pumpkin beer in August or pack Sarah’s stuff?; Best of luck and well wishes in the Big Apple, Lauren Marquez! Shoutout to Erin Amsberry for launching the new IER site; Jordan McGillis goes all out at the gym with Jolt; Paul Paliga knows his toes; Thanks for the vegetable garden Nate Politi; On a scale of 1 to Lauren French, how are your vacation pics?; We’re eyeing your Short’s sandwich and beer Tom Wilbur; Is Erin McPike the new spokesperson for Yuengling?; Where in the world is Matt Haller’s coffee maker?; Hollis Gurley dropped some serious dream inspiration on our Instagram; Highest five to RBG for celebrating 25 years in the Supreme Court (She totes reads the Round Up); Jaime Harrison is too famous for DC; ALEC took to the Big Easy culture during the 45th annual conference in New Orleans, hosting big bash at the famous Mardi Gras world; Americans for Farmers & Families lead spokesman Casey Guernsey with Grover talk need for free trade at ALEC; Alex Finland does not want…he NEEDS 3 PAV tix for the Phish show on Saturday; Senator Cassidy and Rep. Abraham don’t have time for your traffic and we don’t blame them; Axios and HBO are teaming up this fall and we already can’t wait to cancel plans so we can stay home to HBO and chill; Who has NOT had Trader Joe’s crunchy cookie butter yet?

S.E. Cupp announced the show Unfiltered is moving from HLN to CNN starting August 25th. She will be joined with Van Jones and David Axelrod. Congratulations and tune in on Saturday nights; Today is Betsy Andres Steward‘s last day at Business Roundtable as VP. She is making moves to The Boeing Company as Director of Legislative Affairs and Public Policy Communications on the Government Affairs team; Zara Rahim is to head up strategic communications for The Wing. She most recently was the communications director at Vogue and is an alum of HFA, Uber, and the Obama White House and his 2012 campaign; After years of covering Congress, Deirdre Shesgreen is now the foreign affairs and State Department reporter for USA Today; Brandon Pollak has scooted over to Bird, one of the companies behind the electric scooters that litter the streets of cities across the country, as the director of civic engagement and strategy. Previously, he was a co-founder of the startup incubator 1776; Megan Wilson has left The Hill to cover lobbying and campaign finance at Bloomberg Gov; Stephen Trimble is taking off as the new defense editor at Aviation Week, congrats!; Ben Strauss will be covering sports and media for WaPo starting in September. He most recently wrote for POLITICO; One of the few remaining original POLITICOs, John Shinkle is leaving to join U.S. Senate Photographic Services; Trey Yingst is pumped to join Fox News as a correspondent based out of Jerusalem. He most recently was a White House reporter for OANN — safe travels; Edward Wong, who spent 13 years reporting on China and Iraq, will now be covering foreign policy from the NYT Washington Bureau; Last, but certainly not least, Lisa Lerer is joining the New York Times as a national political reporter. Lisa is sad to leave AP, but “excited for new challenges!”; Stay cool this weekend and #DoBigThings

8/10 Friday Round Up: May the Space Force be with you