7/20 Friday Round Up: What the helsinki is going on?

Awesome events: People funnier than you are in town this weekend for the District of Comedy Festival. Don’t go through this weekend without a belly laugh; Janelle Monae’s at the Anthem tonight putting all our own talents to shame; You can watch Jurassic Park at Congressional Cemetery tonight which won’t be scary at all; OMG there is a DC Puppy World Cup (or what we’ve named the World Pup) and it’s happening Saturday; This rainy weekend will be a good time to do indoor stuff so going to see Jesus Christ Superstar is a good idea; Hey garlic lovers, there’s a festival for you all. Breath mints may or may not be included; This is a good weekend to kick back and open a good book. Murder mystery, K Street Killing is perfect for some rainy weather; Summer Soiree for National Advocacy Day is 96 hours away! Get your tickets here.

Starbucks is bringing its first-ever sign-language focused store to DC; Would you pay $169 for a cocktail without alcohol in it? This lunch list made us hangry; Can you survive in DC as an intern without spending money?; Science proves that humans and dogs are besties for the resties; Apparently there’s a rulebook for checking out at hotels; It’s never too late to start your day with a belly flop.

Remember when you weren’t allowed to see PG-13 movies when you were 12? We sat down with Joan Graves, chair of the Classification and Rating Administration (CARA) over at MPAA to find out exactly what goes into rating movies we were – and weren’t – allowed to see without our parents.

We definitely never snuck into rated R movies…nope not us. 🙅 We did, however, sit down with Motion Picture Association of America's Head of CARA to talk about what goes into rating those movies that your 14-year-old-self wanted to see 📽🍿

Waiting for the metro is annoying, but that’s why people were created – to watch, judge silently and text your friends about when you have nothing else to do, but wait on your mode of transportation. 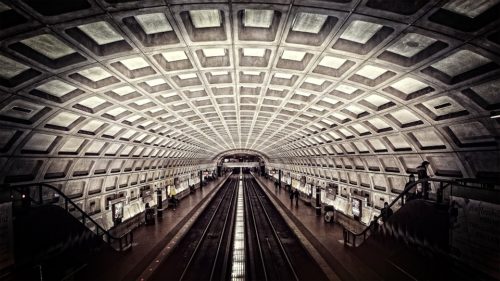 We give Hannah Mooney’s new do a 11/10; Congratulations Kim Jensen and Peter Hodge! Peter proposed to Kim in the Sculpture Garden and celebrated the surprise afterwards at Flight in Chinatown with close friends; We have more fruit snacks for ya, Kristin Fisher; Lauren Zelt’s bedtime just got pushed back thanks to her nifty new reading light; Tell us more about this beach diet, Aly Jacobs; Instagram is definitely stalking Gracie Terzian; Eileen Whelan and Kidd O’Shea can rock a pair of overalls; Is Lauren Hagen still on PCT?; But does Josh Dawsey have any plants?; We’d be happy with either a volcano sundae or cookie sandwich from Ice Cream Jubilee tbh; Happy Birthday Julie Wright!; Christine Schaefer definitely had an all-star week at District Doughnut; Congratulations to Susanna Quinn on the acquisition of Veluxe; Anton Vuljaj, “Get off my lawn!”; Wisdom from Brittany Shepherd, “Any game can be an all star one with the right attitude”; Zainab Javed is back and ready to conquer DC; Ask Brian Wohlert how he kept his beer dry during the All-Star game; Dianna Colasurdo has A+ face tips; Welcome back from the other side of the world, Kristina Sesek and Megan McCafferty! The two just got back to DC after a European trip that included Germany, Austria and Romania; Congratulations Carolina Hurley on a clean record #292; Scarlet Doyle is going to be showered this weekend; Where can Amy O’Connor leave her Yelp Review for the #HRDerby?; What are Christa and Charles D’Amico naming their fur child?

A very special congratulations to NJI Media’s Erin Bergmeister on her promotion to Senior Account Manager. Erin has worked tirelessly establishing and maintaining exceptional client relations and managing several successful projects from start to finish;  Braden Wright, who was previously at LinkedIn, has started his own digital consulting firm – how cool is that? Concierge Consulting LLC specializes in executive and branded thought leadership content strategies, congratulations!; Ben Kamisar who was previously at The Hill is now on the NBC News political unit. FSR has merged with Clearing House to form a new association-the Bank Policy Institute. Alison Hawkins will now be the SVP of strategy and Sean Oblack will be taking over communications at BPI; Locust Street Group announced the addition of Leah Ferguson from Hanover Communications who will serve as the Senior Director of Communications; Shelley Venus who was most recently at HuffPost is joining the Facebook team as video lead for news partnerships; Joining the Wall Street Journal as global head of video and audio is Anthony Galloway who was previously the VP of digital video programming at Conde Nast Entertainment; Christine Spolar is making moves from Kaiser Health News to the New York Times as international business editor; CNN has promoted Rachel Smolking to VP and executive editor of CNN Politics for CNN digital, what an accomplishment!; Irin Carmon who co-wrote a biography of Ruth Bader Ginsburg and the Washington Post’s investigation of Charlie Rose, is joining New York magazine as a senior correspondent; Formerly the global operations lead at Buzzfeed, Zainab Shah is joining The Correspondent as operations lead. She is the first hire in the U.S. as Dutch journalism platform De Correspondent expands to reach English-language readers; Congratulations are in order for Erik Kinney in Rep. Jim Sensenbrenner’s office – he’s been promoted and now handles Sensenbrenner’s Foreign Affairs Committee portfolio; And Leigh Claffey, former press secretary for Sen. Joni Ernst, has taken a new job as communications director for Growth Energy, an ethanol trade association. Kelsi Daniell has filled the position as Ernst’s press secretary; #DoBigThings Washington!

7/20 Friday Round Up: What the helsinki is going on?