What’s buzzing on Capitol Hill? Alex Gangitano’s scoops – whether it’s on the steps of the Capitol building or inside the halls that hold it up, Roll Call’s Heard on the Hill reporter has the news you didn’t know you needed. From covering the Congressional Baseball games and Speaker Ryan’s bad dad jokes, to the Hill’s Charity Cook-off, Alex is giving Capitol Hill a much appreciated personality.

What’s been your favorite story you’ve covered in your career?

I published a project recently about women who run Capitol Hill offices and looked into how many Republicans and Democrats have female chiefs of staff and researched some trailblazers as well. Another piece that I’m proud to have written concerned the parents of victims of gun violence and how many came to be advocates for gun legislation. I spoke to a lot of really interesting people who had been through so much and that was, of course, just the beginning as there are more and more people immediately affected who are becoming advocates. 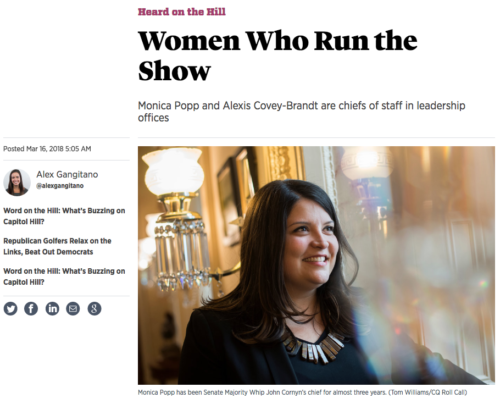 What’s one thing about Capitol Hill that surprises you?

While the #MeToo movement was starting, I unfortunately wasn’t surprised at all that people had stories involving members of Congress and people working on Capitol Hill. But, what did surprise me was how much taxpayer money Congress was spending to settle harassment claims to protect lawmakers.

What’s one question you haven’t been able to answer?

That’s a tough one. There is definitely more than one. I think one thing that I still haven’t been able to shake out of my mind is the shooting at the Republican baseball practice last year. Questions like what could have happened that day if the Capitol Police officers weren’t there or what was the shooter thinking? Covering the Congressional Baseball Game has been a huge part of my job, which includes covering practices, and going to practices was always something I really enjoyed doing.

Roll Call is live before the Congressional Baseball Game! Tune in for lawmaker interviews and a preview from @AlexGangitano who's been attending practices: https://t.co/VJ2TQfLlWG pic.twitter.com/TNRSHj6G3q

What are you doing when you’re not working?

I love traveling and exploring new places, whether that’s overseas or a short car ride from D.C. and especially if the destination involves a winery or brewery. I also run a nonprofit, the Kerri Holbrook Foundation, that gives grants to young people with cancer to live their lives like my friend, Kerri, our name sake, did.

Heading into 2016, here is a recap of what happened on the Hill last year: http://hoh.rollcall.com/congressional-hits-and-misses-best-of-2015/ #dc #capitolhill #congress

D.C. is an awesome food city with so many places it’s hard to pick a favorite. I love trying new restaurants and experimenting with different cuisines but there’s nothing like your neighborhood spot for lunch on a Sunday after a long week. Breadsoda in Glover Park is my go-to for that.