Kathryn Lyons / April 25, 2018 / 4.9k
0
Shares
Facebook Twitter Pinterest Google+
Kathryn Lyons 2018-04-25
They call him the “DC Bar King” – ok, we call him that – but it fits because he runs the DC bar scene (in addition to running the political fundraising scene). If you haven’t been to one of his spots yet, you should maybe rethink your social life, but we aren’t here to judge. We’re here to introduce you to the man behind Mission Dupont, Hawthorne, and the newly anticipated Mission Dos in Southeast DC: Mr. Fritz Brogan.

1. What was the idea behind bringing Mission Dos to Southeast DC?

My business partner Reed Landry and I have always been interested in that neighborhood. It’s often typecast as just a stadium neighborhood but it’s so much more. There’s a real sense of community, great local restaurants and shops , more new buildings than I can count and of course, Nats Park and soon, Audi Field. Mission’s brand has grown tremendously over the past 4 years so we wanted to wait until a very unique location, like what JBG Smith has done at 1221 Van, became available. 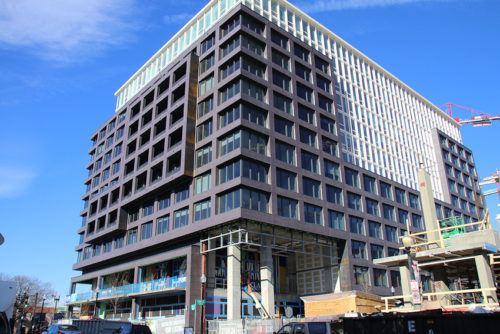 Like at our Dupont location, the margaritas will be served on tap and made with the freshest ingredients and best tequilas (you can feel it the next day otherwise). The space is one of a kind. When you enter, there is a thirty foot atrium marked by a large bell tower. The first floor has a large bar, patio and seating wrapped in a huge glass storefront. As you walk up the massive staircase, you enter our large second floor. Straight ahead is DC’s longest bar at over 130+ feet long, plus two other bar area, a large private event space with its own balcony and two dining areas. The entire second floor is wrapped by a long balcony that spans the length of South Capitol and Van Street. Five garage doors lead to the balcony, giving the space an indoor and outdoor flow.
Along with margaritas, there will be 18 other cocktails and beer on draft in addition to the delicious tacos, entrees and guacamole Mission is known for. We’ll continue our tradition of being the only spot with bottomless margaritas and guacamole at brunch. We’ve designed multiple bar quick order locations so that you can always get a drink, even if it’s before or after a big game. (And yes, Kathryn – you’ll still get carded by a dubious bartender.)

The winter is my least favorite time of the year. Spring all the way. As a native Floridian, I didn’t own my first pair of jeans until I moved here for college at age 19.

Mary Douglas Drydale’s account. While she’s a notable designer and Dupont Circle resident, I love her account because she owns the largest dog I’ve ever seen, Clifford – a 200 pound Harlequin Great Dane. People literally gasp when he walks by Mission because he looks like he escaped from the National Zoo but he’s the sweetest and happiest dog ever.

Clifford and I have just gotten back from @highpointmarket What a great time it was being a “Style Spotter” for #hpmkt2018 we saw so much and enjoyed seeing so many product introductions. Thank you @susan Macon Jamieson for the great photo and to @patriciapalsonhandweaver @ppalson1111 for designing and weaving the beautiful jacket I am wearing. #hpmkt2018 #stylespotting #spottingwithclifford #marydouglasdrysdalestyle #travelingpartner #blackandwhiteforever #patriciapalson #shoppingthemarket #susanmaconjamieson #marydouglasdrysdalestyle #cliffordthedesignerdane

I ask this very same question to our talented team of architects and construction professionals at Streetsense and Wallace Construction about four times a day. Our goal is to open in mid-July before the All-Star game. It’s a very large space and a difficult build, but we’re doing all we can to get there ahead of schedule. Mission Group will also be announcing several other projects in the coming months – we love opening large vibrant spaces that appeal to a broad range of people and bring folks in this town together to socialize, forget about politics and perhaps enjoy a tequila shot or two.

Bar team testing out some new shooter recipes to brighten up this gloomy Thursday. We’ll take them all! #missiondupont #heymaddie