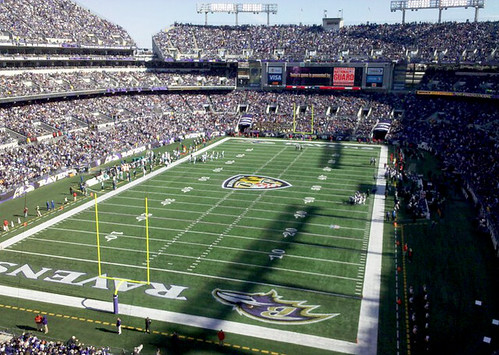 The NFL playoffs. They are as rare in DC as bipartisanship.

The Ravens are playing the evil Patriots and Mr. Bundchen this Sunday in Foxboro – otherwise known as the premier match-up of “Suggs vs. Uggs.”

How did they get here?

By the way, if you haven’t had the opportunity to visit M&T Bank Stadium, Ray Lewis has the best entrance in all of sports.

Ray Lewis and Ed Reed both attended The U.

T Sizzle attended Ball So Hard University. It has a totally different set of rules.

We all know three guys don’t make up the entire defense, so let’s take a deeper look.

The Ravens also have Haloti Ngata and Terrence “Mt.” Cody.

How did the Ravens get so stacked on Defense? It starts at the top.

Their General Manager, Ozzie Newsome, is known for looking deep into the draft and finding gems.

Defense wins championships, but what about the offense?

Let’s meet the running back.

#27, the pride of Rutgers, Ray Rice. Ray is one of the league leaders in all-purpose yards. 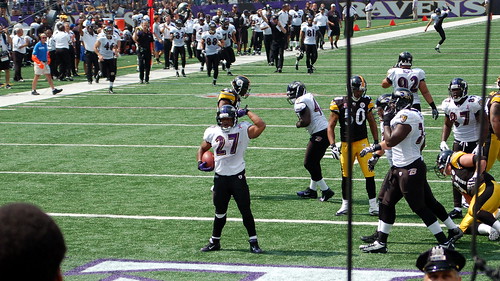 No quarterbacks in Delaware? Fu Manchu mustache out of style?

Meet Joe Flacco. He moves around in the pocket like your uncle playing two-hand tag after Thanksgiving dinner, but he can’t stop winning. He’s led the Ravens to playoffs every year that he has been in the league.

Who does he pass the ball to?

Smith grew up in Stafford, Virginia and attended the University of Maryland. Another gem identified by Ozzie Newsome, the Ravens drafted Torrey in the second round of the draft with the 58th overall pick.

Torrey straight lit up the NFL. The first three catches of his career were touchdowns.

Want to laugh? Remember the DC earthquake earlier this year?

And Lee Evans has also been known to show up once every 5th – 6th game.

Not Hollywood enough for you?

The touching movie starring Sandra Bullock, The Blind Side, was about Ravens LG Michael Oher.

If you’re looking for a book to read while Congress sits still during this election year, check out the book by Michael Lewis. It traces how Lawrence Taylor changed the game with his career-ending hit on Redskins QB Joe Theismann to present day where left guards are some of the highest paid players on the team. It also traces Oher’s tough childhood in Tennessee to his days at Ole Miss and then to present day Baltimore Ravens.

And the Ravens have one more Pro Bowler on the team. Meet Marshall Yanda.

Yanda is a corn fed beast who played football at the University of Iowa. He’s been known to spend down time hunting on Maryland’s Eastern Shore. He also got kicked in his leg a few weeks ago and had emergency surgery after the game. He didn’t miss a beat and made his next start. #Beastmode

So, that’s about it. Welcome to the team.

Put your Chris Cooley jersey back in the closet and wear something purple this Sunday.

At least you’ll have your talking points down. 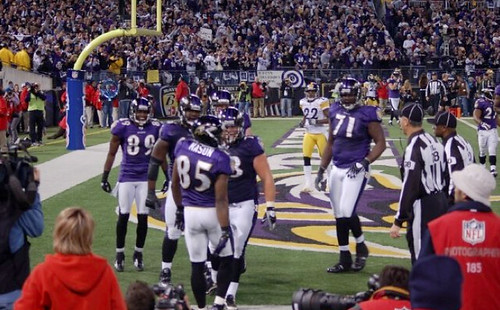 Want to look SUPER smart at the bar during the game?

The Ravens have 7 Pro Bowlers on their team.

The Super Bowl will be played in Indianapolis this year. The Colts left Baltimore for Indy in 1984.

If the 49ers and Ravens win, this will be the first Super Bowl that brothers have coached against one another. That’s a little different from smoking your brother in Tecmo Bowl.

Damn. This was hard to write with no links to Wikipedia.

UPDATE: We’ve had some fans send in a few notes and videos.

Fan 1: “Ravens fans must have an appreciation for Phil Collins songs – one in particular – no matter how uncool it may be.”

Fan 2: “Look for more of this on Sunday”