*FamousDC was recently asked to be a celebrity judge for the Wizard Girl auditions. As sports fans and avid dancers, we of course obliged. The following post was written by guest contributor and judge, Nicholas Holt.

What the Washington Wizards lack on the court, their girls make up for.

It was a bit overwhelming and surreal sitting courtside at The Verizon Center this past Saturday where my fellow contributor (Mark Snead) and I were guest judges for The Washington Wizard Girls tryouts (tough life, right?). Approximately 150 ladies came out for the squad and let me assure you, this group consisted of the most ambitious, beautiful, and talented group of females I have ever seen.

Team choreographer Derric (without a k) Whitfield, formerly the dance team manager for the Houston Rockets, lead the tryouts. Derric taught the girls one routine at a time, providing support and feedback when needed. After the girls practiced for what seemed like a very small amount of time, they had one shot to impress the judges.

We judged the preliminary round to weed out any unqualified participants and were encouraged to give any and all feedback good or bad (especially bad). All 150 participants were not involved in round one as the girls had the option to participate in a pre-tryout prep class. If they took the class or had been a dancer on the squad before, they were first round exempt.

The second round included all of the dancers and this was when the big cuts started. Everyone did a great job, but there were clear favorites.

The final round was intense. It consisted of the 60 remaining dancers and emotions were high as a lot was on the line (we definitely saw some tears).

By the end of the day 32 women were given the chance to pursue their dream of dancing on the Washington Wizard Girls Dance Team. It was impressive to watch these women work the court better than some of the ball players.They were all talented and beautiful. I would happily spend my future Saturdays with them. 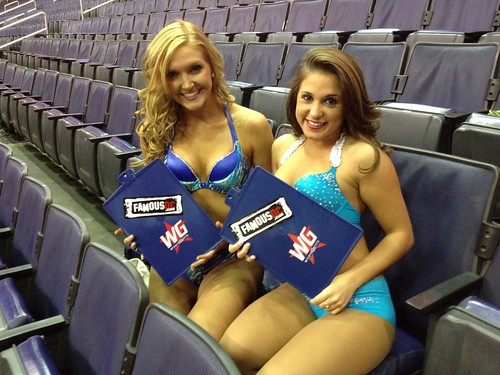