Biden Forces Reporter to Stay in the Closet [Picture]

Keeping a mime locked up in a closet is one thing, but a reporter?  Come on, man.

Staffers with Vice President Joe Biden confined an ORLANDO SENTINEL reporter in a closet this week to keep him from mingling with high-powered guests gathered for a Dem fundraiser. 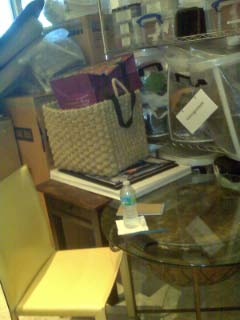 Reporter Scott Powers was the designated “pool reporter” for the vice president’s Wednesday visit to the massive Winter Park, Fla., home of developer and philanthropist Alan Ginsburg. The veep hadn’t arrived yet but most of the 150 guests (minimum $500 donation) had. They were busy noshing on caprese crostini with oven-dried mozzarella and basil, rosemary flatbread with grapes honey and gorgonzola cheese and bacon deviled eggs, before a lunch of grilled chicken Caesar and garden vegetable wraps.

Not so for Powers. A “low-level staffer” put Powers in a storage closet and then stood guard outside the door, Powers told the DRUDGE REPORT. “When I’d stick my head out, they’d say, ‘Not yet. We’ll let you know when you can come out.'”

And no crustini for Powers, either. He made do with a bottle of water to sip as he sat at a tiny makeshift desk, right next to a bag marked “consignment.” Powers was closeted at about 11:30 a.m., held for about an hour and 15 minutes, came out for 35 minutes of remarks by Biden and Sen. Bill Nelson, Florida Democrat, and then returned to his jail for the remainder of the event.

Powers’ phone didn’t work in the closet, but his Blackberry did, so he fired a picture of his impromptu prison to his editors, who posted a short blog item on the lack of freedom of the press under the veep’s control.

Powers didn’t mention his confinement in either of his pool reports that day, saying only that “press coverage was limited to a single pool reporter, filing on behalf of all local media, who was allowed to listen to the remarks but not given an opportunity to talk with anyone at the event.”

On Friday, Powers said, the home’s owner called him. “He said he had no idea they’d put me in a closet and was very sorry. He said he was just following their lead and was extremely embarrassed by the whole thing.”

Biden Forces Reporter to Stay in the Closet [Picture]