The ziMS Foundation tenth annual A Night at the Park was an event that continued to set a precedent for the elements of philanthropy, sports, and music to bring together those dedicated to finding the ultimate cure of Multiple Sclerosis (MS) by funding through education programs and extensive support. “You learn a lot from doing these things. We had no idea it would even last two years much less ten. We want to give people a unique environment that you can’t get anywhere else” Zimmerman told FamousDC. “We always say our goal is that we want people to have a good time. We don’t want people to think they’re just out here to donate money or give away money. We want them to come back every year because they have fun and they want to come back.”

On Monday night, the exclusive list of guests included those directly and indirectly impacted by MS as well as several members of the Nationals team who strive to join their fellow teammate, Ryan Zimmerman and family in their fight against MS. “We’re all a family on a team, we’re there for each other. When one of us goes through something, we all go through something,” said Nationals pitcher Kyle Barraclough when asked what it meant to him to be a part of such a monumental event.

A Night at The Park 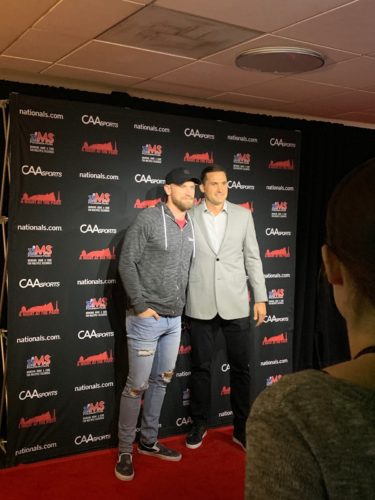 The event gave guests the opportunity to bid on silent and live auction pieces before enjoying an intimate and exciting performance from none other than RIAA Platinum-certified artist Chase Rice. The MS Society was given a donation of $100,000 and Saint Francis Service Dogs a donation of $25,000 towards their next service dog to be given to someone in need. The night rounded out with raising more than $300,000 towards the support of finding a cure for the long-lasting disease of MS. This brings the total amount raised to just under $4 million since the inception of the ziMS foundation in the Zimmerman family’s living room in 2006.

This article was written by Casey Sayre.